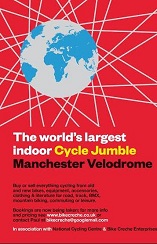 One of the most interesting aspects of this restoration project is the large and very active market for old bike components that I hadn’t previously known existed. Ebay is a major source and plays a central but slightly chaotic role in determining prices (there are quite a few Ebay sales at bizarrely high prices). There are also a few individuals and small firms selling independently through their own websites and a lot of bike “jumble” sales in various parts of the country. Buying, particularly on Ebay where it’s not possible to view items personally, is a risky affair, and sellers vary from the good to the awful. The market is international, because of the complex history of the British bicycle industry. My 4-speed freewheel is an example.

Modern derailleur gearing is (arguably) a British invention, but the idea caught on late in Britain and most of the early development was done in France. The French company Cyclo was a major producer, and they set up a British offshoot in the 1930s when derailleur gearing finally started to gain acceptance here. In the late 1940s and 1950s, British industry was pretty much forced by government policy to prioritise exports, and this led to a vast flood of sales of British bikes and components in the US. So my Cyclo 4-speed freewheel was prompted by developments in France, but manufactured in Britain and then sold and used in the USA. I finally bought it online and re-imported it to the UK some 60 years later.

My favourite supplier in the bike bits market is Reperages, which is a non-profit enterprise operating in France. They collect 3,500 old bikes each year, of which 80% are sent to Burkina Faso or Mali, providing 40 work places for disabled people in Africa as well as much needed transportation. Reperages also employs disabled and disadvantaged people in France.  Vintage components of significant value are sold through their Ebay shop, and the sale proceeds support their charitable work. They are remarkably helpful and are willing to search for specific components that are hard to find. They’re a pleasure to deal with.

At the other extreme is a well-known dealer (who I’d better not name), with a professional-looking web presence but a remarkably unprofessional way of operating. He is slow to send ordered items and (particularly) to refund payments on items that he discovers he can’t supply after they’ve been ordered. His main technique for dealing with complaints seems to be to ignore them. There’s an extensive thread on one of the major cycling bulletin boards that’s full of similar complaints about him.

You have to take the rough with the smooth, I suppose…

This entry was posted on December 29, 2014 by Steve Pudney in The bike and tagged classic cycle restoration, dealers, Reperages.

Restoring a classic Ellis-Briggs cycle for a Land's End-John O'Groats charity ride on...June 15th, 2016
65 today! And off we go...
Follow Old Bloke On An Old Bike on WordPress.com