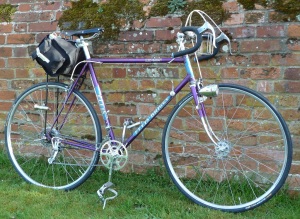 Well, she’s now built up and nearly complete – 14 months early. I had thought it would take much longer to track down the right sort of old components and get everything working, but it has turned out to be less problematic than I feared.

I took advantage of the dry weather and light traffic last week and used her for commuting. So the old girl has done her first 50 miles in her new clothes – and done it beautifully, too. There’s still a touch of the greyhound in her. 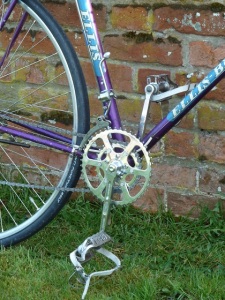 I’m not sure the old rider did so well. As I expected, the Simplex front gear shifter is pretty difficult to use – it’s hard to make a gear change without getting tied up in your own ankles – hence the “suicide” label, I guess. It gets better with practice, but gear changes need much more forward planning than is the case with modern gears. Unfortunately hills sometimes appear in front of you without a lot of notice…

There remain quite a few details to attend to, but this marks the end of the main build phase, so I now have to think about a training programme and route planning.

This entry was posted on April 12, 2015 by Steve Pudney in The bike and tagged Alzheimer's charity, classic cycle restoration, Ellis-Briggs, Simplex.

Restoring a classic Ellis-Briggs cycle for a Land's End-John O'Groats charity ride on...June 15, 2016
65 today! And off we go...
Follow Old Bloke On An Old Bike on WordPress.com